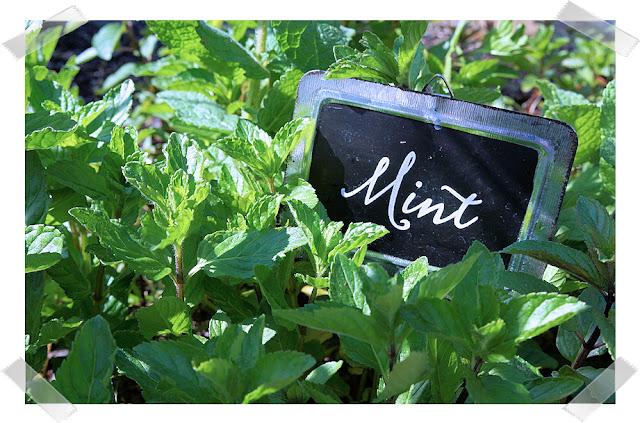 Mint can be a rather unruly thug in the garden if it’s left to its own devices, but the human race has had a soft spot for this herb dating back to around 1,000 B.C. The Romans believed the consumption of mint would increase their intelligence; the ancient Egyptians used it as part of their funerary rites, and in medieval times mint was used to cure mouth sores and dog bites. It’s helped to whiten teeth and prevented milk from curdling. The Elizabethans used it as a strewing herb to keep fleas at bay and it’s also been used to help deter ants.

In Greek myth, Minthe aka Menthe and Mentha was the name of a beautiful water nymph pursued by Pluto, the God of the underworld. When his wife Persephone found out about the dalliance she turned Minthe into a plant that would be trodden underfoot. Having been caught in the act, Pluto could do nothing but accept his wife’s vengeance.

The Roman, Pliny the Elder, advised scholars to wear a crown of mint to aid concentration, but he also warned lovers that it was contrary to procreation. The Greeks, however believed the opposite - their soldiers were warned to avoid mint during a war as it was feared that increased love-making would diminish their courage. Mint is said to bring luck and helps to increase your money prospects if a few leaves are rubbed into the purse. Mint has been used to cleanse and protect the home from disease and negativity and is also a traditional folk cure for a headache; the cure was achieved by rubbing a few mint leaves on the forehead.


Mint is an herbaceous perennial with a square stem like other members of the labiate family, and has spikes or whorls of flowers in summer; the flowers come in a variety of shades including white, through to purple with a wide range of pink and bluey lilac shades in between. In height they range from 15-90cm. Most of the plants cultivated today originated in the Mediterranean, but only a handful of varieties can be sown direct from seed e.g. Spearmint, Peppermint and Curly Mint, the rest have to be raised from cuttings. Saving seed from your pineapple mint, won’t give you true to type plant, but will revert to the plant the cultivar was crossed with, so take stem or root cuttings of mints.

Most mints grow year in year out, only needing to be lifted, divided and replanted or given a top dressing of fresh compost, they will grow in almost all soils types and situations, so long as the soil is not too dry or too cold.Mint actually prefers soil which is slightly acidic and will thrive in heavy clay soils also. Mint will grow well in pots so long as you keep it well watered, don't allow it to dry out and re-pot it occasionally! Most mints have aggressive spreading roots and, unless you have the space to let them roam, they need to be restrained by some means such as planting them in containers that are buried in the soil to help contain their roots. 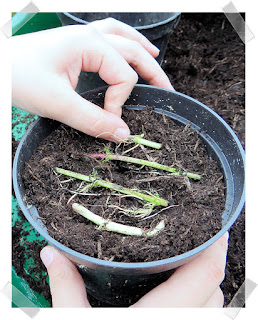 Propagating mint is very, very easy and both are a good way to help rejuvenate your mint plant stocks, both methods are a good way of getting kids involved with gardening as they give quick results.

Root Cuttings - Mint puts out stems under the ground that sprout roots to anchor the plant, and to help it self propagate. To make fresh plants harvest several 2"-3" pieces of these rootlets and lay them on top of a pot of fresh compost and then cover lightly with compost leave water and leave for a couple of weeks. Pretty soon you will see new plants emerge that can then be used to replace older mint plants, or give them to friends.

Water Cuttings - Another quick and easy way to propagate mint is to take cuttings from the mint plant. You'll need a glass or a glass jar, I use one of our drinking glasses, you'll also need some water, you can use tap water but some areas have chemical nasties added to the water that can interfer with the root growth, you can use clean rain water but I always use bottled spring water when taking my cuttings.

Take a piece of you mint plant which is long enough to fit in your container usual around 6" in length. Ensure you remove the leaves from any part of the stem that will be under water, if you leave them they will rot and you'll get a slimey mess in the water and not healthy young roots.  Trim the stem with a clean knife or scissors just under a leaf node - a leaf node is the area underneath where the leaves grow on the stem (see photo to the right) your rootlets will emerge from the leaf node areas that are under the water in a few days if the weather is warm.

Depending on the conditions your cuttings are taken (sunlight, water type used etc.) you could have a new mint plant(s) to pot on in 1 - 2 weeks. Other herbs can be rooted this way and I'll add information on this very soon, but mint is one of the quickest to root using the water method, making it ideal for children who want to see quick results.


Mint can fall prey to pests such as frog hoppers and aphids and some diseases, the main ones are the fungal disease Mint Rust (Puccinia menthae) and a strain of Powdery Mildew (Erysiphe biocellata). Mint rust appears as rusty coloured blotches on the leaves, at the first sign, pick the leaves off the plant and get rid of them, I pinch out the whole stem to be sure. Don’t allow the spores to get into the soil, and don’t put the infected plants in to your compost bins. You can use a fungicide to treat the rust but NEVER on mint plants that you plan on consuming.

Powdery mildew generally appears when the plants are very dry and suffering from water stress, keep the plants well watered and make sure that air freely circulates around them to keep mildew at bay. Should your mint plants become infected, spray with a simple solution of 1 teaspoon of bicarbonate of soda to 1 litre of water. 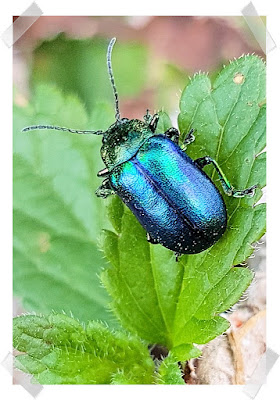 There are mint varieties which can be resistant to mint rust available if it’s a problem in your garden look for varieties such as Tashkent, Moroccan and Curly Spearmint from the spicata mints and Swiss Ricola and Black Peppermint from the piperitas Mentha's.

The Mint Leaf Beetle (Chrysolina menthastri) can also cause quite a bit of damage to mint plants. Despite the fact that each beetle is no bigger than 5-10cm long, they have a huge appetite for mint foliage. They're most active between May and August, in late Summer if you look closely at the mint you may also spot the larval stage of the mint beetle, a blackish, squidgy-looking grub which also munches its way through the mint leaves. This pest will also chew on other plants in the labiate family such as Lemon Balm, Catnip and Hyssop. The only successful way to eradicate these beetles is to pick them off and 'squish them' or find another way to dispose of them.


Over 30 species belong to the mint-family. The most common types used to breed new varieties are Peppermint (Mentha piperita) with its dark green leaves, reddish stems and lavender flowers, and Spearmint (Mentha spicata) which has lighter green, pointed leaves and pink flowers and is gentler on the stomach for lots of people. Some find peppermint too strong and an irritant, spearmint is milder. There are several hundred varieties of mint worldwide, and more are being added all the time, as well as the two already mentioned, varieties include: Apple, Grapefruit, Lemon, Camphor, Cinnamon, Orange, Bergamot, Corn, Field, Water and Basil. 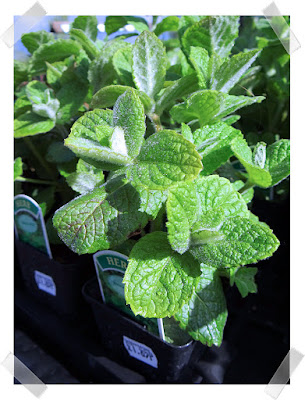 My two favourites by far have to be ‘Bowles Mint’ - which was the very first mint I ever came in contact with, even today when I smell it, it takes me back to my childhood and the lamb roasts cooked by my mum on Sunday's, accompanied by fresh mint sauce from the garden. Bowles was the only ‘herb’ my dad grew and for me it’s THE mint to make mint sauce with, I’ve tried others but I always come back to Bowles.

My second favourite mint is ‘Chocolate Peppermint’, which makes what has to be one of my favourite herbal teas, the chocolate flavour seems to intensify when you dry the leaves, it never fails to give me an ‘after eight’ moment, and the taste is refreshingly indulgent, try using it to flavour homemade ice-cream.

I grow a lot of ‘Moroccan Mint’, its lovely as a tea either hot or cold and I chop it and use it sprinkled on cous cous and salads. I have favourite mints that I use for making pamper treats and household items, ‘Eau de Cologne Mint’ is great added to pot pourri to deter flying beasties, it makes a rather nice addition to a foot bath as well. Although I’m becoming fond of ‘Lavender Mint’ for that purpose these days, the scent of lavender is very pronounced, with the mint it’s like having two of my favourite herbs in one. ‘Swiss Ricola Mint’ is a really good mint to use in a facial steam when you have a cold; its minty camphor aroma is great for clearing stuffy sinuses.

There are a few mints I grow mostly for their decorative value, ‘Silver Mint’ is one of them, the leaves are like soft velvet, inviting you to stroke them, they have a soft spearmint aroma and make an excellent pot plant placed near a seated area in a sensory garden. ‘Corsican Mint’ is a semi evergreen, creeping mint with tiny leaves and tiny mauve flowers which prefers a moist and shady spot for optimal performance. I grow it in pots buried in the path, when its stepped on, it releases a pennyroyal like aroma.

‘Ginger Mint’ has variegated leaves that add colourful golden yellow splashes to break up greens, the flavour to me is more lemony than ginger, its one I grow but don’t use in the kitchen. ‘Curly Spearmint’ is a pretty mint, but the flavour just doesn’t really do much for me. Unlike the variegated ‘Pineapple Mint’, which I use it primarily as an ornamental, in tubs amongst summer annuals as a foil for the bright colours, but I do harvest the leaves to add to fruit salads and float in summer drinks, it has a flavour that is more fruity than minty but it’s lovely nonetheless.
Posted by Herbaholic at 06:53

Herbal First Aid For The Garden

Ladybird = Good Bug Scale Insect = Bad Bug The idea of 'Companion Planting' is familiar to most people these da... 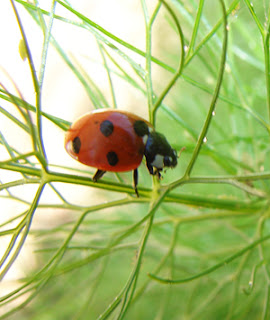