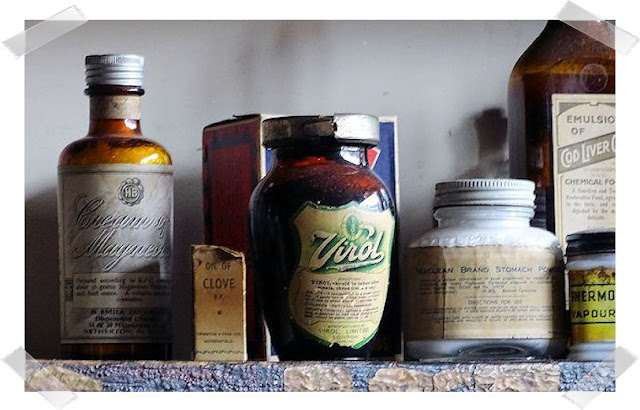 A few years ago we took a trip to the Black Country Museum with my young nephew, taking in the chemist shop full of its old proprietary remedies and curatives, rows and rows of bottles of syrups, tinctures, salves, ointments and jars of herbs (more of that in another post soon!) The trip rekindled my fascination with old 19th and early-20th century remedies, so much so, I decided to take a closer look at some of the everyday remedies used by our Great Grandmothers and Grandmothers.

The type of things that they would have been able to purchase in the local chemist and apothecary shops, what they contained and whether they were viable cures, or of little use and in future articles look at the herbs they could have used instead. I began looking at the subject of old herbal remedies several years ago when I focused on Composition Powders, so I thought it was about time that I look at more of the old remedies for blood tonics, consumption cures, diabetes, epilepsy and medicines that even claimed to cure baldness amongst other things and see what they contained, if they worked and whether anything like it still survives.

A while back I came across the story of a Norfolk lady known as Elizabeth Freke who in the early 18th century made an inventory of all the herbal remedies that she had in her medicine chest which totalled a staggering 200+ home made medicines and tonics, all based on knowledge she had gleaned from reading Gerard's Herbal. Amongst her remeedies there was a wide variety of cordials, syrups and potions, including Elixir Salutis sold as a general health tonic which is believed to have contained senna pods, jalap root, anise and caraway seeds, and juniper berries amongst its ingredients, all macerated in alcohol, which was then strained and mixed with equal parts treacle and water. Mrs Freke’s medicine chest also contained Aqua Mirabilis, a distilled water made from spirits of herbs such as betony, lemon balm, mint and sage, and other aromatic ingredients including cardamom, cloves, cubebs, galangal, ginger and mace.

An example of a recipe for making Aqua Mirabilis from the era can be found in ‘The Complete Family-Piece and Country Gentleman and Farmer's Best Guide’ published in 1736 “To make Aqua Mirabilis Take Cloves Mace Cinnamon Nutmegs Cardamum Cubebs Galangal and Melilot Flowers of each 2 Ounces Cowslip Flowers, Spear mint and Rosemary Flowers of each 4 Handfuls, 1 Gallon of the Juice of Celandine, a Gallon of White wine, a Gallon of Canary [wine] and a Gallon of Brandy, let them be infused for twelve Hours and distil them off in a gentle sand heat.” Elizabeth Freke’s medicine chest also including aromatic waters of rosemary, tinctures of lavender and nutmeg, syrup of saffron and a variety of chaffing dishes, distillation apparatus and a pestle and mortar to grind and mix together herbs, spices and resins to make her remedies.

Back in the 18th century over 80% of medicines were derived from herbs in one form or another, and like Mrs Freke, every housewife was schooled in the basics that were required to keep her family healthy using herbs as remedies and preventatives. She used recipes that would have been passed down from her mother, and her grandmother as well as remedies that she learnt from her friends and neighbours, the basics would come from what they could grow or what they could source growing locally in fields and hedgerows, from gardens if they were lucky enough to have one, ingredients she couldn’t find would come from the local apothecary or even the local grocers shop.

In 1769 Scottish doctor William Buchan published his book ‘Domestic Medicine: or, A treatise on the prevention and cure of diseases, by regimen and simple medicines: with an appendix, containing a dispensatory for the use of private practitioners’ which become the standard work of reference for family medicine enjoying 22 reprints. Very much like Culpeper in the 17th century Buchan’s sole aim in the 18th century was to empower the lay person to be able to look after their own health and that of their families. In the preface he wrote that his friends cautioned him that if he published the book, "...it would draw on me the resentment of the whole faculty" and that "By the more selfish and narrow minded part of the Faculty, the performance was condemned; while many ... received it in a manner which at once showed their indulgence, and the falsehood of the common opinion, that all physicians wish to conceal their art..."

By in the 19th century things began to change, the population boom coupled with environmental problems like the smog that resulted from the industrial revolution, and health epidemics like cholera and typhoid fever all took their toll. The 19th century housewife came less to rely on her own skills to heal her family, instead turning to the physicians and the medical profession. The number of qualified doctors in England and Wales rose from 14,415 in 1861, to 22,698 by 1901 and by 1911 free medical treatment was being given to workers who fell ill as a result of industrial accident and pollution. Families came to rely more on the doctors and less on the herbal remedies that had been part of their heritage.

However the cost of seeing a doctor was beyond the means of most working class people, so invariably the sick of the poorer classes couldn't afford to see a doctor, so large companies stepped in offering cheap over the counter ‘patent medicines’ some of which contained antimony, lead and mercury which caused more harm than they cured. Some, all though not all, of these remedies were produced by an assortment of quacks and charlatan's, who offered 'secret' and ‘patented’ remedies and 'cures' for illnesses that were less herbal and more chemical in nature, and in some instances the cures were just plain dangerous.

Our ancestors would never have known just how dangerous some of the medicines they took were as they paid for 'secret formulas' that cost pennies to manufacture believing that it was made by a doctor and would therefore help them, but most of the remedies were not very useful. The poor trusted their health to the 'man' albeit a company, who had doctor or M.D. in his title believing because it was being sold by a doctor that bogus remedy would be better equipped to cure their families ills than they were, all that changed in 1948 when the NHS started offering free health care for everyone, but as the NHS took over health and medicine stepped further and further away from herbal remedies and took the path of manufactured and synthetic drugs.
Posted by Herbaholic at 12:13