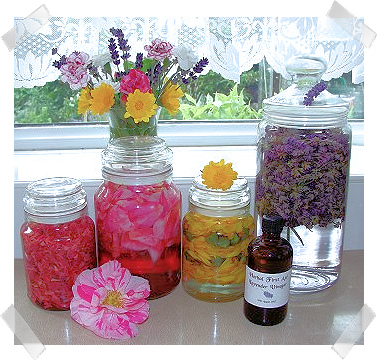 I've been growing herbs for years, and using them in cooking, but only late last year with the encouragement of Sarah Head have I begun to harvest herbs and make my own remedies, I started with herb vinegars back in October 2007 with the very last of the lavender flowers in the garden and a handful of lavender leaves. I also made lemon verbena vinegar, rosemary vinegar and sage vinegar. So far this year I've made peppermint tincture, honeysuckle honey, honeysuckle vinegar and rose petal vinegar. The vinegars have a lot of uses, cosmetic, culinary, medicinal and domestic. I'm intrigued by some of the oxymel recipes in Julie Bruton-Seals book 'Hedgerow Medicine', these call for 1 part vinegar to 5 parts honey, and as you can use a variety of vinegars and honeys, this could turn out to be a very nice way of curing sore throats and other winter ills.

I'm increasingly becoming interested in using the flowers of herbs in a variety of ways, most people don't give flowers a second glance beyond their perfume, but there are so many things that you can make either cosmetically or culinary from things like marigold, lavender, roses, pinks and evening primrose and many more herbal flowers as well. Two of my favourite uses for lavender flowers on a culinary level include Lavender Biscuits and Lavender Lemonade. Armed with a garden full of delightfully scented herbs and flowers and a lot of recipes and enthusiasm I'm going to have a go at making some flower powered goodies that can be eaten, used to treat our ills and for bath time treats.

I've spent this morning in the garden and kitchen, after harvesting some lavender, roses and marigolds I've made a litre of lavender vinegar, this stuff is great as an alternative to fabric softener in the wash, add a touch to the water when cleaning the windows, use in the mop bucket to mop the floor to help disinfect and fragrance the room and as a bonus you can use it to add zing to summer salad dressings.


I also made some marigold tincture, most recipes I've seen call for using the fresh petals only, but I added half of the flower heads as well because they smelt so good and it seemed a shame to waste them. I have some dried marigold petals so I'll make a batch of tincture with those and see which smell better. I'm going to use the tincture to make a cream, as I've just read that marigold cream is good for treating spider veins (thread veins), something I suffer from, as did my Mum. In a few days there will be another batch of marigolds ready for use and I'm going to make an infused oil with them, following the method Sarah showed me, from there I'll progress to making my first salve or cream, using the recipes I've gathered. 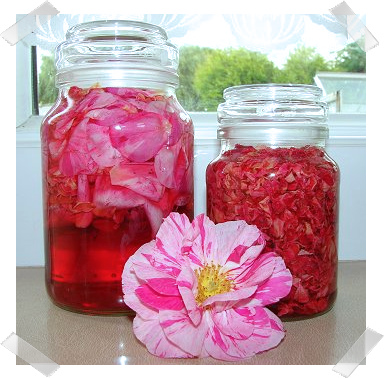 I also checked out my rose petal vinegar and discovered that despite having a beautiful colour, the vinegar hardly smelt of roses at all 😒 Not to be deterred, I strained the vinegar from the first batch of petals and added fresh petals from the garden and a couple of handfuls of dried Rosa centifolia petals.

As I've read that highly scented dried petals give better results than fresh if the the fresh are not very highly scented. I've also made a small batch of purely dried rose petal vinegar, to see which is better. I have to say that I used my hands to squash all the vinegar from the first batch of petals and afterwards my hands felt incredible soft.

I'll have to pick some fragrant wild roses and try with those, the type I'm using from the garden are Rosa Mundi ‘Rosa gallica versicolour’, one of the gallica type of roses, which is a lovely old rose, with semi-double blooms with large with splashes of pink and white on a crimson background. It is fragrant, but maybe not fragrant enough! Incidentally, 'Rosa Mundi' is said to be named after 'Fair Rosamund', the mistress of Henry II back in the 12th century!
Posted by Herbaholic at 00:25 No comments: 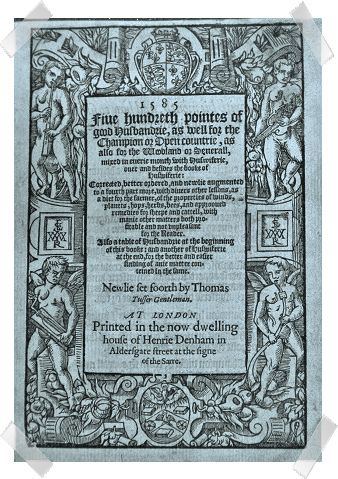 Every time I read an old book on the subject of herbs I learn something new. A while back I was doing some research in to the Tudor uses of herbs and came across Thomas Tusser's Five Hundred Points of Good Husbandrie, a poem written in 1557, that includes a lot of old herbs and flowers. Below is a list from the poem of 21 strewing herbs for example. I've added the original spelling of Tusser's in brackets, along with any notes he made at the side of each herb where appropriate, for historical interest. 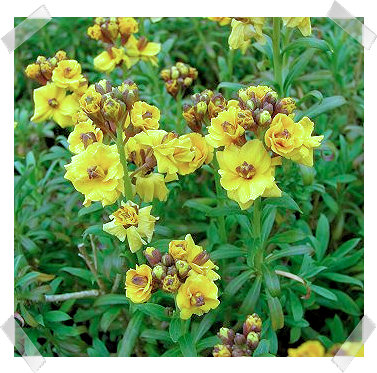 Further into Tusser's poem in the 'Herbs, Branches And Flowers For Windows And Pots' section he writes of the Gillyflowers and the Gilliflowers. I assumed it was a spelling mistake and he was referring to the same plant I have always know as the gillyflower the clove pink, so I left it at that.

Then recently whilst reading Mary Thorne-Quelch's book 'Herbs & How To Know Them' I came across something that stunned me. According to her, Cheiranthus cheiri is the wallflower that was know as the Gillie Flower or Gilliflower in Tusser's time. Whilst Gilly flower or Gillyflower is the Dianthus (clove pinks).

Recently I sowed seeds of a new variety of pinks called Victorian pinks and some 'Tudor Tapestry' stocks, stocks are also from the wallflower family, so this evening I began thinking about creating a Tusser Mussie patch. And filling it with herbs from Tusser's time, and adding little plant labels with the old world spelling on. Last week I managed to get some gilliflowers (Cheiranthus cheiri) so with the stocks, pinks and other new items I have its looking like the Tusser patch will emerge. And joy of joys gilliflowers appear to be edible and if memory serves me correctly you can make wine with them, just as you can with the clove pinks, something else to experiment this year on my list of edible flowers :)
Posted by Herbaholic at 00:20 No comments: 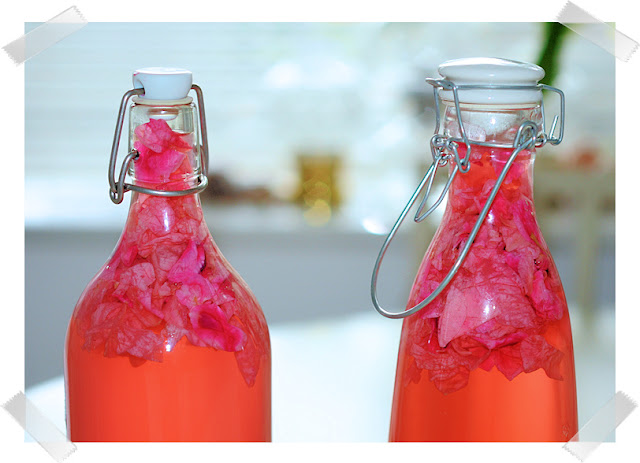 Like most herb vinegars its really simple to make, 1 part flower/herb to 4 parts vinegar, you can use any sort of vinegar (except brown malt vinegar!) I usually use cider vinegar, but for the rose petal vinegar I used white vinegar, white vinegar allows the colour of the rose petals to shine through, whilst darker coloured vinegars make the resulting vinegar look 'muddy'.

For this vinegar I used rosa mundi petals plus a few Cardinal de Richelieu heads which are a deep pinky purple, above is a photo of what the vinegar looked like after just 1 hour in the sun and below is the result after 3 hours!

I'm so glad that I used white vinegar now as I don't think the colour would have been as pretty with cider vinegar. I'll try using white vinegar with Hidcote lavender and see if it turns the vinegar lilac like it does lemonade. I forgot to take a photo of the vinegar when I first made it when the vinegar was just white, I'll be making some more in a few days time and will remember to take another photo then.

Using Rose Petal Vinegar - You can use rose petal vinegar in the mop bucket, in bath water, in salad dressings and you can also dilute it half and half with rosewater to make a wonderful tonic for the skin. Or why not make a rose petal oxymel with 1 part rose vinegar to 5 parts honey, great for sore throats. Rose vinegar is also good for cooling sunburnt skin, soak a cotton wool ball in the vinegar and apply to the sunburnt area.
Posted by Herbaholic at 23:20 No comments: 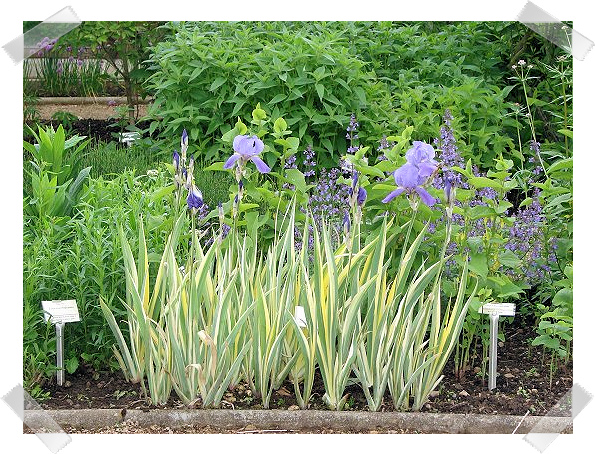 A bit late I know, but at the beginning of the month I helped out on the Herb Society stand at Herb Day which was run jointly by Garden Organic and the Herb Society over at Ryton. It was a lovely day, there was a lovely cookery demonstration by Sophie Grigson, she actually converted me to gin, but only if it has elderflower cordial in!  Caroline Holmes gave an interesting talk on the plants in the Poison Garden at Alynwich and Jenny Jones gave a couple of guided talks around the herb garden at Ryton to members of the public and Herb Society members. 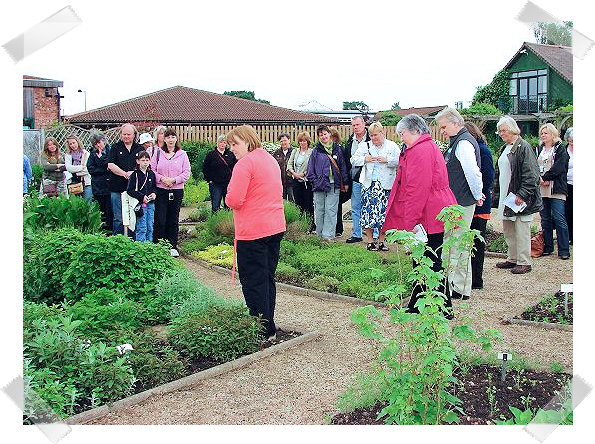 Kim and Rob Hurst from The Cottage Herbery were at the event selling herbs, I picked up a Tree Spinach (Chenopodium giganteum), a Camphor Plant (Tanacetum balsamita) and a new African Blue Basil (Ocimum kilimandscharicum x basilicum) as the one I had last year died, hopefully now I have the greenhouse I'll be able to overwinter the tender herbs. But the best part of the day was meeting people and hearing what they had to say about herbs, answering questions where possible and recruiting new members to the Herb Society, I'm helping out at Gardeners World Live on the HS stand on the morning of Saturday 14th so if anyone reading this is going, please drop by the HS stand G496 and say hello!
Posted by Herbaholic at 23:12 No comments:

Email ThisBlogThis!Share to TwitterShare to FacebookShare to Pinterest
Labels: Out & About
Newer Posts Older Posts Home
Subscribe to: Posts (Atom)