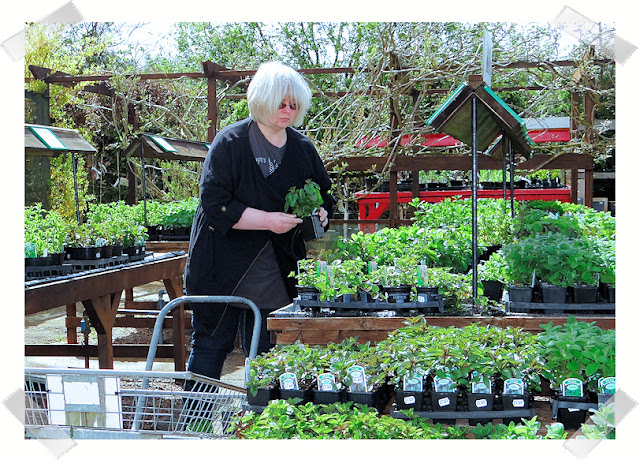 Debs Cook is a self-confessed herbaholic, who has had a keen interest in herbs since she was a young girl. Originally from Manchester, she now resides in Derbyshire with her husband and their two cats, Poppy and Rosie. She is the former Social Media Manager and Resident Herb Expert for JustBotanics (JB having now moved on to pastures new); Debs is also a former trustee of the Herb Society (2007-2010), and is now one of their advisor's.

The door to the world of herbs was first discovered by Debs when she was just 9 years old, it was the spicy sweet scent of clove pinks that set her on her journey, they sat on her Nanna's window ledge releasing their wonderful aroma, "I admired them so much and asked so many questions that I got to take them home with me that evening, they lived on my bedroom window sill until they faded. I still have one of the flower heads that I pressed in a book. Clove pinks still rate amongst my favourite scented flowers as a result. From the moment I smelt that wonderful fragrance I was hooked on aromatic plants, by the age of 18, I'd discovered herbs in all their glory".

Her first experiences growing herbs were very basic, she grew the easy herbs, the ones that we easy to obtain back in the 90's such as Sage, Rosemary, Chives and Thyme to begin with,"There wasn't much space for anything else, in the garden I had then and choices back then were very limited". The love of herbs continued to blossom and Debs eagerly read any book she could get hold of on the subject, she began visiting herb farms and gardens and collected the less common herbs such as Balm of Gilead, Arnica, Wood Sage, Myrtle and many more herbs and medicinal plants to her garden.

Debs helps to maintain the website of the Discovering Herbal Medicine Course. She has also written herbal articles which include information on cultivating herbs, as well as writing an assortment of posts on her blog at Herbal Haven on growing and using herbs, key figures and companies that have contributed to the rich herbal history we all share.

She has written articles for the Herb Society including a 3 part feature on their founder Hilda Leyel, and wrote articles as the resident herb expert for Garden News magazine (2012-14) and  Grow Your Own magazine (2006-07) writing a herb of the month column for them. In early 2008 Debs was commissioned by the Guardian to write a ‘How to Grow’ guide on a selection of the most popular culinary herbs. She has also appeared on BBC1's Countryfile, in support of the humble dandelion, where she fed Ben Fogle dandelion soup!

A keen amateur photographer of herbs and wild flowers, her photos have featured in articles in 'Garden News', 'Grow Your Own' and 'Yoga and Health Magazine', and also in ‘Herbs’ the journal of the Herb Society. She is a collector of herb books and has almost 700 books in a collection, which she lovingly refers to as her 'library', the oldest book dates back to the 17th century, but the majority of them are from the 21st century with gems from the 19th and 20th centuries which are her favourite herbal eras.

She regularly gets asked to proof read for herbalists and herbal authors and has performed this task for Henriette Kress, Julie Bruton-Seal and Matthew Seal, and Zoe Hawes. Debs is currently researching and writing a book on Dr W. T Fernie, the man who wrote 'Herbal Simples Approved for Modern Uses of Cure' and a book on the wild flowers and herbs of Derbyshire.