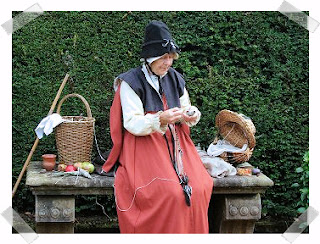 Visiting Hardwick Hall today was a little different than usual, there were a variety of people re-enacting various aspects of Elizabethan life from playing music, dancing and the clothes they wore to games and crafts. Over in the herb garden, one of my favourite haunts, there was a lady simply called 'Mary in the Garden' who sat demonstrating making lavender wands.

I stood and watched her for ages, the technique was very simply, and unlike today's lavender bottles she used twine instead of ribbon, which gave a rustic feel to the finished wand. The scent as she worked was wonderful, the lavender releasing its soothing essence as she talked and demonstrated, I was captivated, we had a lovely long talk about herbs, lavender in particular and the Herb Society.

Mary explained that you needed to use an odd number of lavender stalks, the old varieties are best as the stems are stronger, the new varieties are not as strong and tend to snap when you bend them over. It's important that you work the lavender when its green (i.e. before its dried out) Mary had her lavender in some damp cloth to stop it drying out.

To Make A Lavender Wand

Take your odd number of lavender stems (Mary used 13 in the one in the photo), carefully hold the lavender by the flower heads and bend the stalks over the flowers. When you've bent over all of your stalks, tie in your twine or thread leaving a sufficient length to tie to the other end of the twine when you've finished. You then weave through the stalks in an under ~ over way all the way around and continue to weave until you're as far down the stems as you want to be. Mary's example below has 11cm of woven lavender and 4cm of stalk, making a wand 15cm in length.

To finish tie in the twine securely at the base of the weaved wand then tie the piece you left at the beginning to the piece at the bottom to form a handle. Finally trim the leftover stalks to the desired length and your lavender wand is ready to hang from a door or carry around.

I was very lucky that day as Mary gave me the one she was working on to take home, I walked around Hardwick Hall after her demonstration wafting the wand under my nose and having a rather enjoyable afternoon, the scent of one of my favourite herbs following me everywhere. The wands are wonderful months afterwards you only need to give them a gentle squeeze to release yet more wonderful lavender aromas. 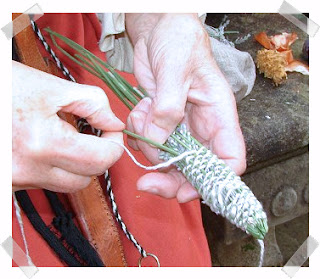 In Tudor and Elizabethan times, lavender brew was being sipped by maidens on St. Lukes day to divine the identity of their true loves. They'd chant, "St. Luke, St. Luke, be kind to me. In my dreams, let me my true love see." Lavender in the pillows of alpine girls brought hope of romance, while lavender under the bed of newly-weds ensured passion. Finally, a famous nursery rhyme called "Lavender Blue, Dilly Dilly" was written in 1680 and talks of "Whilst you and I, diddle, diddle…keep the bed warm." Lavender-inspired loving strikes again!

Lavender experienced a renaissance in Tudor England. When Henry VIII dissolved the monasteries, lavender moved to domestic gardens. The ladies of the house used lavender for all kinds of things. It was placed among linens, sewn into sweet bags, used to freshen the air, and mixed with beeswax to make furniture polish. Traditionally it was planted near the laundry room and linens and clothing were laid over the plants to dry while absorbing the fresh odour of lavender.
Posted by Herbaholic at 10:50 No comments: 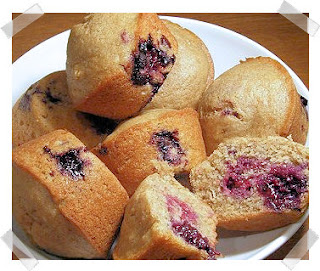 If reading my article on the Blackberry left you wanting to try making more use of the delicious fruits from this useful bush then you'll be happy to know that over time I'll be adding some tasty recipes with ways to use this delicious herb from making jam (which can then be used to make a soothing drink for sore throats) and syrups and vinegars, but to get you started these muffins are wonderful first footing.

They are also a great taste of autumn, not everyone's cup of tea granted, due to the seeds in the berries, but if you like a bit of 'crunch' they're perfect. Add to that the fact that blackberries and cinnamon and both good for easing stomach problems that have a diarrhoea component, great medicine!

1. In a large bowl sift together flour, baking powder, cinnamon & salt, stir in the sugar. Leave to one side.

2. Beat egg in another bowl, stir in milk, then melted butter.

3. Pour wet ingredients into dry, stir until just combined. Gently fold in the blackberries careful not to crush fruit.

4. Spoon into muffin cases / tray. Bake for 20-25 mins. Muffins are done when tops are lightly browned and spring back when pressed gently.

Tip - I made a similar berry muffin in the summer using strawberries, 20ml of culinary rose water and 220mls of milk and used rose geranium scented sugar and they were yummy to, roses and strawberries just seem to go so well together.
Posted by Herbaholic at 11:21 No comments: