Herbs We Use To Know: Indian Bean Tree (Catalpa bignonioides) 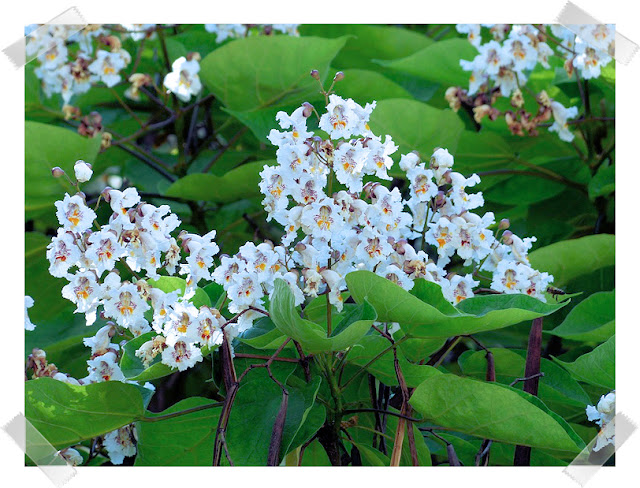 Back in September 2007 we visited Wollaton Hall, Gardens & Deer Park in Nottingham a rather impressive Elizabethan mansion that doubles as a museum, an interesting place with beautiful and well maintained gardens. It was whilst walking around the gardens that I came across the tree in the above photo, it was covered in huge lime green leaves, the most exotic scented blossoms (very like frangipani in fragrance) and the most bizarre stringy bean like pods hanging down. It also had two very annoying children swinging from the branches and almost snapping them off! In truth that was what drew my attention to the tree as it was planted near a side path at the side of the glass house and we were at the time heading in the opposite direction! As we approached the children ran off and the tree was safe, at least for the time we were there.

At the time I had no idea what this tree was, not could I put my finger on what it smelt like, all I could muster to mind beyond the ohhhh mmmmm and WOW! was Plumeria (aka Frangipani), so I did the usual and took a series of photos, in the hope that I'd be able to identify it in the future. And success, the future is now! I've just been looking though books on trees and shrubs and cross referencing on the internet and finally discovered what the mystery tree was, the Indian Bean Tree (Catalpa bignonioides).

I was delighted to discover that it has the following medicinal uses: - A tea made from the bark has been used as an antiseptic, antidote to snake bites, laxative, sedative and vermifuge. As well as having a sedative effect, the plant also has a mild narcotic action, though it never causes a dazed condition. It has therefore been used with advantage in preparations with other herbs for the treatment of whooping cough in children, it is also used to treat asthma and spasmodic coughs in children.

The bark has been used as a substitute for quinine in treating malaria. Whilst a tea made from the seeds is used in the treatment of asthma and bronchitis and is applied externally to wounds. The pods are sedative and are thought to have cardioactive properties. Distilled water made from the pods, when mixed with Eyebright (Euphrasia officinalis) and Rue (Ruta graveolens) is a valuable eye lotion in the treatment of trachoma and conjunctivitis. 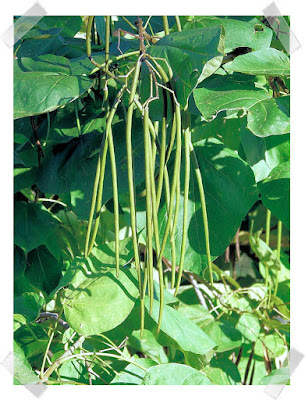 Despite the name the Indian bean tree is not from India, it's actually from the USA, it does not grow beans and the botanical name Catalpa should really be Catawba. When details of Catalpa bignonioides were first recorded in the south east of the United States, the botanist who did so wanted to name the genus after the local native American (or red Indian as they were then known) tribe. His transcription of their name, Catawba, was incorrectly recorded as Catalpa and the tree is now also known as the Southern Catalpa.


The bean reference is slightly easier to explain and refers to the tree's bean-like pods, which are very slim and almost perfectly cylindrical and can grow up to 16 inches in length. These pods contain winged seeds and remain on the tree throughout the winter before splitting and releasing the seeds.
The Indian bean tree was introduced to Britain in 1726 and has been planted widely ever since for its decorative appeal, amazing really, all the places I've visited over the years and I've never seen this tree before, or maybe I have in late winter, leafless, or early spring with just its new leaves.

It grows best in full sunlight and moist soil, it is quite adaptable and has flourished almost everywhere it has been introduced. However, in colder areas the beans tend not to ripen so it doesn't make viable seed and so the tree must be reproduced using cuttings. Fortunately it does this readily and is also raised from seeds quite easily. The oldest known Catalpa bignonioides is in Reading, Berkshire where it lives in a church graveyard. The twisted trunk is one of the major attractions of this 150-year-old tree, although the deteriorating health of this specimen led to it requiring extensive surgery in 2007.
Posted by Herbaholic at 13:08 No comments: