I have a collection of 19th and 20th century books on herbs and some from the 18th century, as regular readers to my other blog will know, and through the wonders of the internet I’ve discovered examples of herb texts and manuscripts that date back to the 5th century and beyond. Sadly many of the recipes and formulas for herbal remedies that they contain, appear to be written in a foreign language that is all Greek to me lol!

For example William Bowker's 19th century "Valuable Herbal Prescriptions" book is filled with drachm and grain weight measurements, along with pints and ounce measurements. Other books like Peter MacEwan’s "Pharmaceutical Formulas: the Chemist and Druggist’s’ Book of Useful Recipes for the Drug Trade" contain the same drachm, grain and ounce measurements, as well as containing plenty of formulas that contain old apothecary measures, as can be seen from the photo below.

What Were Apothecary Weights & Measures?


First we need to define what the old apothecary weights were, but before I can do that, I have to add a caveat, my examples below only apply to the UK. The old herbalists who wrote books in America employed a different set of weights and measures, so it is important that you know from where the person writing the book you’re reading comes from, and also which market the book was intended for. 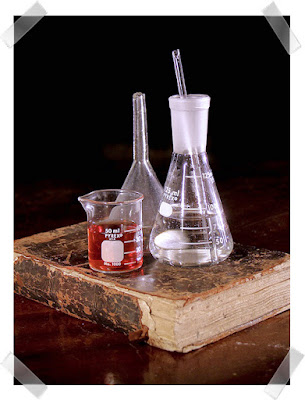 For example in the UK, 1 Pint in apothecary measurements was equal to 20 imperial fluid ounces of water, or approximately 568.26ml. In the USA a apothecary measurement of a pint was 16 fluid ounces approximately 473.18ml. So if you are reading “Elixirs and Flavoring Extracts” by 20th century American Eclectic Medicine practitioner John Uri Lloyd and a recipe calls for 1 pint, you’d need to work your recipe on 16 fluid ounces (473.18ml).

If the book you're referencing is by 19th century English Medical Botanist George Slack for example, and a formula calls for 1 pint of a liquid such as 'Spirits of Wine' then you'd add 20 fluid ounces (568.26ml). Unless, and this is where it starts to get complicated, the recipe in the English book is citing an American reference, if that is the case make sure you chose 1 measure and add the corresponding measures to your recipe.

For liquid measure, or liquid capacity, the basic unit was the gallon, which was divided into 4 quarts, 8 pints, or 32 gills. In the U.S. a gallon, also known as a wine gallon, is equal to 231 cubic inches (cu in.). A British imperial gallon is measured as the volume of 10lb of pure water measured when it is at the temperature of 62°F and was equal to 277.42 cubic inches (4.55 Litres approx). As you can see British units of liquid capacity were approximately 20% bigger than the same American units. The U.S. fluid ounce being 1/16th of a U.S. pint; the British unit of the same name is 1/20th of an imperial pint.

Apothecary weights were a system of units of mass that were used by apothecaries and druggists throughout the English-speaking world before 15th, and were based on the grain weight a unit of weight equal to 0.065 gram, or 1/7,000 pound avoirdupois. The avoirdupois system abbreviated avdp. is a measurement system of weights which uses pounds and ounces as units, it was first used in the 13th century and was then updated in 1959 and is still in use today in most English speaking countries. Grain weight was one of the earliest units of common measure and also the smallest, it is a uniform unit in the avoirdupois, apothecaries’, and troy systems.and each weight had its own symbol which to the person not schooled in the system can look like hieroglyphs.

16th century apothecary formulas also contained references to Handfuls which were abbreviated to M.j. Half handfuls written as M.β and little handfuls written as P.j. to further complicate matters, a handful measure was literally what you could hold in a cupped palm, you can see the problem with consistency using that unit of measure, due to the varying sizes of hands.

I have to say that despite reading and seeing references to handfuls having been used as a measure of weight in the Apothecary system since the 16th century, it is fairly uncommon and so far I have found no definitive proof of what the exact measure was. I have discovered references to another measurement for dry weight used around the same time called the lock which was used to deter the amount of dry weight goods that a person could grasp in one hand, and further discovered that the Greek word drachmē means “handful.”

Moving to the late 19th century, and the introduction of the 1878 British Weights and Measures act that required apothecaries to use the avoirdupois weight system that had been around since the 13th, instead of apothecaries’ weight, initially to measure goods that they sold, and then subsequently for using to measure medicines as well.

Up until the late 19th century the drachm was known as the dram, when the new system was put in to place the spelling of dram was changed to ‘drachm’ to mark the difference between the avoirdupois ‘dram’ and the apothecary ‘drachm’. In 1971 the use of apothecary weights was formally abolished and chemists and druggists used the metric system to measure out and make up medicines.

Old Formulas also made use of roman numerals for quantities the roman numeral for 1 is i, 2 is ii a ½ was denoted as ss so if a formula called for 3½oz it would be written ℥iiiss, in some formulas, a lower case j is used but it still has a value of 1. Walter Bastedo explained in his 1918 book “Materia Medica: Pharmacology: Therapeutics Prescription Writing for Students and Practitioners”.

“Roman numerals of prescriptions small letters are employed as: iv = 4, xlviii = 48. In writing, small letters are used for one (i or j), five (v), and ten (x), and capitals for 50 (L), 100 (C), and 1000 (M); and it is customary to draw a line above all the letters making up the number, the dots of i and j being put above this line. In a number with terminal one, as one, two, three, seven, or eight, the last letter is printed j, or written as i with a stroke projecting below the line, e. g., ij, iij, vij. This is to signify that it is terminal. Errors have been made because of a comma inadvertently added, and even because of some mark, such as a fly-speck, upon the paper. The dot over the terminal one is an additional check; for if all the letters i and j are not dotted, the pharmacist may be in doubt as to the number intended. As v, x, 1 and c are not dotted letters, it is incorrect to place dots over them.” 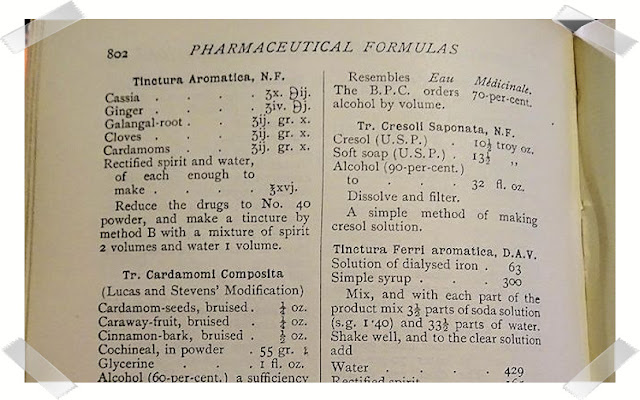 So to translate the formula for Tinctura Aromatica in the above photo: -

You would need the following amounts: -

A further example from Bowker’s book is for a formula for pills to be taken at night time to ease an ulcerated stomach, which called for: -

All to be mixed with gum mucilage and made in to 4 grain pills making them approximately 0.26g each by weight.

Until now I've never got my head around these old weights and measures, until I converted a set of measures of mass and capacity into modern day metric based on a list of old weights, measures and equivalents taken from Harold Wards "Herbal Manual" from 1936, below I’ve given approximate metric equivalents for today which I hope the reader will find of use?