As I've mentioned before some of my posts have been moved over from my old blog and I'm taking the opportunity to update them with new information, e.g. garden closures where applicable, changes to the layouts, plus any additional facts I've come across since my original visit and to add more photos where possible. This post refers to a visit I made to the garden in Northumberland back in September 2009. Whilst there we also visited the Chester Walled Garden in Hexham, I never wrote about that visit and its now sadly been closed down back in 2010, so I will write a piece and add soon.

These retro herbal journeys serve a double purpose, as the Coronavirus lockdown has 'grounded' my herbal expeditions this year with many places being closed until the virus goes away, or they are open but in a limited way and are harder to safely access, my herbal core needs a therapeutic lift and by looking back at places I've visited I can remember the days out I've taken and look forward and plan days out maybe later this year and in subsequent years.

The William Turner Garden is dedicated to the  Morpeth man born in 1508, he was responsible for some very pioneering work in botany and medicine, earning him the posthumous title of 'The Father of English Botany'. Turner will be a herbalist I write more about in the future, his life has a lot of political intrigue and twists and turns to it, but he is best known for his book "A New Herball", which was originally published in three parts between 1551 and 1568 and was dedicated to Queen Elizabeth I.

Turner's herbal provided a landmark in the history of botany and herbalism, breaking new ground in its accuracy of observation and its scientific detail. It was the first original book to be written about the botanical and medicinal aspects of plants in English, and the first to include reliable descriptions of the plants themselves and the places where they grew.

Previous English language herbals were all translations of the original Greek texts, and the quality and accuracy of the translations varied greatly. Turner kept the translations from the Greek for the medicinal uses of the herbs he wrote about, but he also added his personal experiences from when he used or prescribed any of the plants. A New Herball contained over 300 species of plants, and those that didn't have a common English name, Turner gave them one where there had been none before. 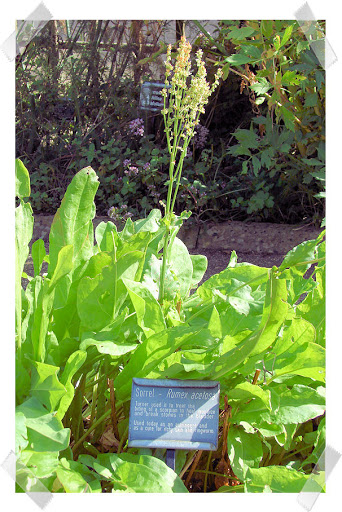 The William Turner Garden is situated on the edge of the formal gardens in Carlisle Park in Morpeth, and consists of a 'Physick Garden', a long border that contains herbs that were first brought to the UK in the 16th century and the garden was further enhanced in 2012 when the William Turner Woodland Bank was added to it by the Morpeth Lions Club. The club planted 40 trees on the steep bank above the formal beds, many of which were species referred to in Turner's Herball, including Almond, Medlar and Quince.

Carl Linnaeus was a friend of Turner's and named the plant family Turneraceae after him which consists of 120 species in 10 genera (as of 2020) and includes the herb Damiana (Turnera diffusa). Turner was responsible for naming several plants including Monkshood (Aconitum napellus), the Spindle Tree (Euonymous europaeus) 'It may be called Englishe longe cherry tree. The female is plituous in Englande and the butchers make prickes of it' and Yellow Loosestrife (Lysimachia vulgaris).

What struck me as odd in 2009 and still today is that there are woodcuts and paintings of Gerard, Culpeper, and other herbal writers if the 16th century, but I have never seen a likeness of Turner, only images of pages of his herbal, given he was Dean of Wells Cathedral and rubbed shoulders with many of his peers, I find it hard to believe no likenesses exist, maybe one does and I haven't found it, I will update if I ever do!

I had a little niggle whilst I wandered around the garden in 2009, because one of the info boards tells visitors that the physick garden is planted with herbs which were used in medicine in Turners time, it then mentions Foxglove (Digitalis purpurea) and refers to its ability to control irregular heartbeats. In actual fact this property wasn't scientifically and medically recognised until 1785 long after Turner's time. Turner recommended foxglove for treating "farcye" which is I believe is a contagious horse disease which can be transmitted to humans. He recommends putting it between the horses saddle and back and calls it an excellent remedy, he wouldn't have been familiar with the use for treating heart conditions.

Culpeper used Foxglove in ale along with Polypody (Polypodium vulgare) to cure the 'falling sickness' better known today as epilepsy, the remedy being best to treat people that had been troubled by the condition for 20 years or more. He also recommends the use of Foxglove for making an ointment for scabby heads and wounds. Robinson's New Family Herbal also lists the use of foxglove in ointment form attributing it to the Italians who used it to heal any fresh and 'green' wounds, the ointment was made from the juice of the foxglove leaves and lard and was applied to scrofulous sores with good effect. 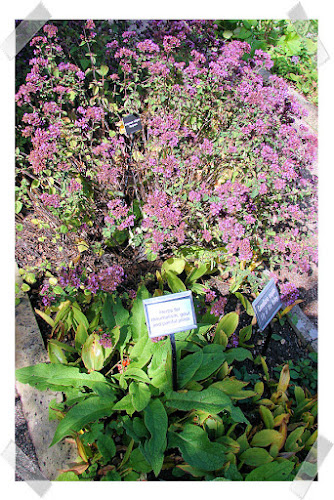 The day we visited the weather was glorious, but because our visit took place in mid September many of the herbs had gone over, but there was still plenty of interest. Bee's and butterflies were drinking in the nectar and weaving a dizzy pattern of activity around the garden.

As well as information boards about Turner and his life, all the herbs in the display beds had small plaques like the Sorrel one seen above. Each plaque detailed the way Turner used the herb and underneath there was information the way we still use the herb today.

Herbs were also arranged in beds like this one "Herbs for Rheumatism and Painful Joints" which included Comfrey, Marjoram and Lily of the Valley, although Turner doesn't add much about Lily of the Valley in his herbal beyond mentioning its name, but Gerard does say that Lily of the Valley 'The flowers of the Valley Lily distilled with wine, and drunk the quantity of a spoonful, restoreth speech unto those that have the dumb palsy and that are fallen into the apoplexy, and is good against the gout, and comforteth the heart.'

The garden was first opened in 1999 and as time passed the plants did what plants do and migrated to places they weren't supposed to be, some had thrived at the expense of more delicate herbs and some that were originally part of the planting scheme had died off, so in 2019 the Friends of William Turner Group drew up a new planting scheme that would "focus on sustainability and also low maintenance with plants from the Herball chosen to reflect those needs." The group also intend to add new species to the garden over the coming year. I am scheduling a visit in 2021 (coronavirus willing) to Northumberland this time to visit Bede's World and also the Dilston Physic Garden, so whilst there I'll make time to revisit the William Turner Garden to see how it has evolved.

What I will say about this small garden is if you are travelling a long way then make sure you are visiting other gardens in the area, or that you have other places to visit in Morpeth, if you do then add this pretty little garden to your itinerary but I wouldn't recommend going if that's the only place you're going to visit, because its rather small, but if you're going to visit other places in the area, make sure you stop by, Carlisle Park is free to enter and is currently being redeveloped (2020) to include more facilities including a tea room.
Posted by Herbaholic at 17:39

Email ThisBlogThis!Share to TwitterShare to FacebookShare to Pinterest
Labels: 16th Century Herbalists, Out & About